“The most serious mistakes are not being made as a result of wrong answers. The truly dangerous thing is asking the wrong questions.” — Peter Drucker

On occasion, I am called to troubleshoot online marketing problems. It usually sounds like, “Greg, we spend a lot of money on SEO and Google and social media and I don’t think it’s working. Will you take a look at it?” Usually, this is code for “I am going to cut a budget, but I don’t want to accidentally sever something critical.” At these moments I think of myself as The Wolf. [writes] One Body, No Head. “That’s 30 minutes. I’ll be there in ten.”

Marketing spend is one of those areas that makes CFOs crazy because of how it gets explained in department meetings. When I visit with members of the marketing team it’s clear why. Besides being noticeably defensive, they like to talk about details. Nothing is more boring than marketing campaign details. This makes the CFO regret asking questions. In contrast, the sales director talks broad results in dollars and cents. The CFO isn’t bored, has no regrets questioning to sales.

When I troubleshoot, I start by talking to the sales director and asking for details about what percentage of their results are attributable to marketing. Then I talk to the marketing director and ask for details about how much they contribute to the sales team’s success. Between those two questions I can come up with a percentage of budget to cut. The further they are apart, the less money they get to work with until they can come together.

There you have it. “I’m Winston Wolf. I solve problems.”

I have no knife skills. I’m not talking about Tommy Lee Jones vs. Steven Seagal knife skills 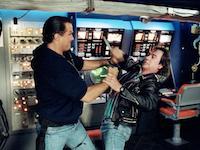 I’m talking kitchen knife skills. I did a stint as a prep cook at my friendly neighborhood Applebee’s for a what felt like a long time, but was probably two weeks, but their knife skills training amounted to learning how to not chop fingers off. I prepped guacamole, I chopped lettuce, and I used some industrial chopping machine for onions. I’m sure I did more, but it’s a blur. I quit by slipping a note under the door really early one morning. Cowardly, sure, but intensely liberating. My kitchen confidential memoir is simply, I hated it.

My next job was at a caterer. I delivered boxed lunches to law firms and financial services offices in downtown Denver. At the time I told myself someone would look at me and say, “Hey, you don’t look like you should deliver lunches. Come join our firm!” Like being discovered in Hollywood. Didn’t happen. The first day on the job I was riding in the van with the guy I was replacing and when we finished the deliveries he said, “let’s just stay down here and watch the Denver Grand Prix.” I had never seen a race before and enjoyed it immensely. He brought a couple of the boxed lunches for the road, and it was great.

Trouble is, he never told the bosses this was happening. He was leaving the job, so he didn’t care. I took the brunt of their anger, and they were angry. So angry. I got to keep the job after the owner consulted with his advisor, a palm reader. I kid you not. I quit that job a few weeks later, but before I left they discovered I used to work as a prep cook, so my last days were spent cutting onions without an industrial cutting machine.

When my lovely bride asked if there were any cooking classes I wanted to take at her school’s culinary institute I said, “knife skills.” She laughed. She teaches a class for the culinary students and brought my folly up with the instructor. He said, “he’s right, you should start with knife skills.” I would have loved to have been there to see the look on her face. “He’s right.” Damn skippy.

When you see my smiling face on Wednesday morning, I will have new knife skills. I just received the course reminder note, so it’s really happening. Watch out.

Just in time for the new kitchen. That’s a story for another time.

Make it a great week, next week.