I did a short burst marathon road trip and knew it would leave me wrung out less than 72 hours later. A friend said, I don’t know how you do it, and I told him about this interview my son turned me on to. It’s Dax Shepard interviewing Matthew McConaughey.

At about 5 minutes in Dax says to McConaughey “you have the constitution” referencing McConaughey’s ability to party late and still get up and go.

You can listen here – https://armchairexpertpod.com/pods/matthew-mcconaughey

[McConaughey] “Is this night on the way down or we about to switch into third gear and go up?

“And then I gotta go, ‘Ok.’ And if I choose to say ok, the rockets are gonna launch and this could go till sunrise.

“So I get my mind right. I’ll go head off that night, look in the mirror and go, ‘Hey buddy, this is going to suck tomorrow morning. Now we’re going to bulldog through this. We’re not going to make any excuses, we’re gonna get up an hour and a half early, we’re gonna go run and sweat this damn thing out and tomorrow is gonna be hard . . . are you in?’

“And we’ll shake on it or not. And then the next morning just go, ‘Here we go man, ride the baseline.'”

I’m not sure what it all means, but it’s what I kept in mind when planning the trip and helped me justify driving 20 hours for a few hours of fun. If, in turn, Mr. McConaughey’s words helps one of you battle with too much Holiday Cheer, it’s worth it.

“Think like a queen. A queen is not afraid to fail.” – Oprah

We have a lot of birds where I live. I’ve attributed it to the number of mature trees, but part of it may be my lovely bride’s obsession with feeding them. Over the years we’ve tried a lot of bird houses and bird feeders and I admit to a little thrill when I see evidence they’ve been used. Today I am looking out on a new addition to the bird feeder family. A glass house advertised as a “Hanging Squirrel Baffling Bird Feeder”

Impressive handmade little thing, I know. It’s hard to tell from the picture, but the openings to the bird seed is via the little holes. There are some outside troughs a squirrel could get to, but the real riches lay inside. Easy for the squirrel to see, but hard for them to get to. Baffling to the squirrel you might say.

The birds love it. Whatever you put in the glass box disappears within days. Sitting here staring at the nearly empty marvelous bird feeder that baffles critters I see something. 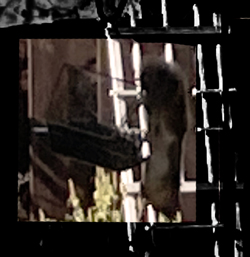 It’s a terrible picture but that, my friends, is a squirrel to the right of a glass/gold bird feeder. The furry thing is hanging upside down and tipping the bird feeder over, so the seed falls into its little mouth.

A little squirrel keg stand if you will.

Wilson and I chase it away. And the others. (I doubt squirrels are any good at keeping secrets. It can’t be just one.) It doesn’t matter. There is one hanging off this thing every time we look.

It’s ok. Things are tough out there and not just for birds. It’s the least we can do, installing this beautiful, Canadian hand-crafted, bird multi-species feeder in the yard.

I’m taking it as evidence there is always a way. Keep trying. Or to paraphrase a TV icon, “think like a squirrel, a squirrel is not afraid to fail.”

Have a great week, next week!