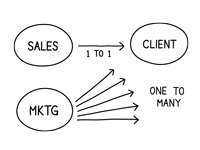 When you have a large market who is unfamiliar with the problem your product solves, consider getting them together in groups. I learned this when I was in charge of hiring a dozen new sales people for a new service. The challenge was it needed to be done quickly. When you have one or two slots to fill it makes sense to advertise for a lot of resumes, read them carefully, and start making calls for screening. When you have a time limit, you look for shortcuts.

I asked a friend in HR what she did in a similar scenario, and she suggested hiring events. Set up a process where you put 10-20 people in a room at once, explain the work, answer questions, and ask the interested parties to stick around. I told her I hated group interviews, and she said something like, “well, you asked.”

I followed her advice and it worked. Not only did we fill our quota, we ended up with a pipeline of sorts. (In startup mode it was a bit of a sweatshop with high turnover, the pipeline was nice.)

Some lessons I took from the experience:

How do you make this work if you’re selling a new product or service? Good question.

The topic of the event, the venue, and procuring a list are all separate topics I may get into someday. Just know for now I’m a fan. Events work, and events take a lot of work, but few things boost a new product or service faster. 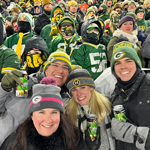 This weekend I was lucky to attend the Packers vs. 49rs NFL playoff game. It ended poorly for the Packers. Suddenly and poorly. The crowd was primed for a victory until that last minute and most were sad as they left the stadium. Most, but not all. I heard a lot of bitter yelling, saw some scuffles, and heard stories of brawling. It made me think back to the last time I was taken to the woodshed, as they say.

I’ll preface by saying I remember getting in fights most days in my grade school. I’m not sure why, but it happened. In fourth grade I think I fought a kid named Mike Sundling every day, right before school started, for weeks on end. Fifth, sixth, seventh, eighth grade. Every year had some big scuffle. Some of it had to do with me being larger than most kids in my class, but whatever it was, I was only too happy to jump into a ruckus and start swinging.

That ended between eight and ninth grade. A group of us used to head over to the local mall by cutting through a parking lot. This lot was for a nightclub called Proof of the Pudding or something like that. It was referred to as the “Proof.” The reason we cut through the Proof was to get to the tunnels running under the busy street that led to the mall. This required jumping off a wall on to a parked car before proceeding through the parking lot.

One evening the car was someone’s TransAm or something. Six or seven of us, each weighing at least 100lbs jumping from a wall to the hood of the car, then from the car to the ground. Looking back on it, someone should have gotten beat up by one of the valet parking crew. We were being knuckleheads. I was last off the wall and first to get clobbered by some Matthew McConaughey in Dazed and Confused looking dude.

We never took that shortcut again, and it was the last time I got in a random fight with a stranger. Well, the last time I took a beating from some random stranger, knock on wood.

There’s still time, of course. I’ll need to get out more than I do these days but hey, the pandemic can’t last forever. At least I have that to look forward to.