[The Interrotron] “Named by my wife because it had the words ‘interview’ and ‘terror’ in it. . .I like eye contact.” – Errol Morris

I’m back! Back in the recruting game. It’s for a special project and after a half dozen phone/zoom/coffee house visits I’m thinking about communication. Errol Morris is a documentary filmaker known for his extreme close ups in interviews. Instead of the camera being off to the side raking both the interviewer and interviewee, the film’s subjects look right at you and tell their stories. I heard him say he had to come up with a special teleprompter-like system to make it happen so both he and the subject could be in the same room and maintain eye contact.

Why did he have to invent such a contraption? Eye contact is simply that important to him. There’s a Netflix special from illusionist Derren Brown called “Sacrifice.” In it he has his subject develop empathy with a stranger in minutes by asking him to sit face-to-face, knee-to-knee and stare into the stranger’s eyes. It’s only four minutes but by the end both of the men are in tears.

I want business development people and buyers to have better communication by sitting face-to-face, uninterrupted. If we can’t get face-to-face, I want a sales Interrotron. It will cut down on bad decisions made on both sides. It has to.

. . .so maybe getting face-to-face isn’t foolproof, but with my version of the Sales Interrotron it’ll be hard to get assaulted.
I think. It’s still in testing.)

But, were you comfortable?

Last week I mentioned not remembering anything making me laugh hard early in the week so I didn’t have any stories to share. I wrote that on Tuesday because on Friday I knew I’d be up early driving to the Frozen Tundra. 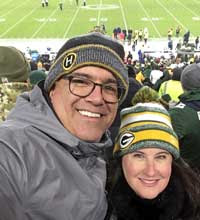 I love the drive up north, but this time of year it’s hard to dress for the journey because it’s sub-20F outside but inside the truck is 68F and if the sun is shining on your side it gets uncomfortably hot. Sometimes the passenger gets punished, sometimes it’s me so I picked some loose layers to wear on the drive, including a pair of black, fuzzy, running pants. Two hours in I knew I made the right choice because I felt great. I was chatty, the passengers were right with me, and the roads were clear. Good times.

The best part is I remembered my runing pants have no pockets, so before leaving I slipped my fancy tennis shorts on underneath. This way, when we stopped for gas, snacks, and bio stuff, I could carry my phone and wallet. However, on the first stop I remembered another feature of my shorts/pants combo. No fly.

Yep. All the way across the midwest I was like a five year old dropping full trou to use the urinal, hoping no one had to wash their eyeballs after unexpectedly wandering in behind me.

That, mis amigos, made me laugh. A lot.