“Motivation alone is not enough. If you have an idiot and you motivate him, now you have a motivated idiot.” – Jim Rohn

I did something I haven’t done in a long, long time.

I interviewed for a job.

The last round of job interviews I went through was probably in 2004 before I started working at the big bank. Since that time I have conducted or sat in on hundreds, maybe a thousand interviews, but I haven’t had the experience of a job-seeker in many years. It was an eye-opening experience.

I have one big takeaway: Middle managers need help.

In this case I was referred to the director of a new division of a company, and we had an interesting talk. He describes where his new group fits into the vision of the leadership team and what he is tasked with accomplishing. Sounds interesting. It’s a big company and I need to be plugged into their hiring system so off I go to HR and start that process. The role I think I’d be perfect for is filled, but the group will grow fast, so he wants me to talk to the manager that will be my boss. Get in now, he says, because things will change fast. “You’ll want to be part of this,” he says.

The vision is compelling. The future world their customers will operate in is clear to me. The value they will bring to their customers in this future world is pretty clear. It’s almost like they attended one of my strategy workshops because those are the first things I look for. All that’s left is the work to get there.

I meet the manager. It’s a Sr. VP level role and the guy’s resume is impeccable. A ton of industry experience and leadership roles in competing organizations. Impressive person.

I ask him to describe his role and right away something is amiss. It doesn’t sound like the same position. Barely sounds like the same organization. I ask him to describe the future and what customers will be dealing with in say, five years time. It’s off. Not way off the director’s vision, but definitely off. As the conversation goes on he describes the others on his team, some he inherited and some he is bringing in.

There’s going to be a conflict.

The point where management has to translate their leaders vision into planning is like where sunlight enters a pool. The vision is going to be refracted, sent in a slightly different direction. As someone who just tried his hand at basic woodworking I can tell you that “slightly off” adds up to “way off” over a large distance. What seems minor today comes back to bite you later. Invest more time than you think you need at the start. Make sure you’re on the same page when it comes to the destination.

I predict this manager and his director will be having a lot of conversations in the coming months/years to hone their differences. Especially once results become critical to the organization. The more time they spend trying to limit the refraction right now, the better. New hires are coming in and will be working hard to make things happen. Building momentum.

Make sure they are pointing in the right direction before their momentum is built.

“The Aerobin is a technological breakthrough in home and garden waste management.” – my muttering for the last 3 weeks 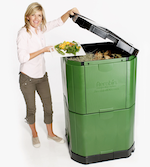 Wilson the ABC has arthritis in his right front elbow or whatever it’s called. It makes him limp on walks so we’ve cut down on the distances we cover. Added a few more stops too. I read an article on walking dogs once and the author described these shorter, exploratory walks Smell Walks. We definitely smell more.

Less time spent covering great distances has led to more time in the backyard. As part of our Continual Backyard Improvement Project (CBIP) I ordered a big compost bin back in January. It, like many things, was backordered, but arrived three weeks ago. It’s more attractive than the re-purposed trash barrel I was using, and promises to need to no turning.

You see, my friend, I have invested in the Aerobin 400. Whenever I see the words Aerobin 400 in my head I hear a Phil Hartman-esque old-timey radio announcer voice. “The AERO bin four HUNDRED.” It holds a lot. My lovely bride could fit in there. She’s tiny but she is a full-grown human. (See pic above. Not my bride but similar size.)

The brochure promises that I have the world’s most advanced static home composter. It’s a technological breakthrough and I should have a lot of crumbly compost, rich in organic matter, in as little as three weeks.

I have tossed in every bit of dry and wet organic matter I can find. I’ve pulled out a big bottle of brown leachate which will soon be enriching the tomatoes. I’m pretty excited.

Wilson the ABC has taken little interest in the green monster. We play abbreviated games of Frisbee, (one toss seems to be enough for the old man) and spend a lot of time just sitting on the patio. Waiting for the compost. If he could only feel the rush of hot, wet air on his face when dumping in salad scraps he may feel differently. It’s really cooking.

Now that I think of it, I may be the only person in the household taking an interest in the AERObin 400. At least judging by the looks I get when pulling compostable material out of the bin proclaiming “Wet!” or “Dry!” So much waste.

You’ll see. You’ll all see! Victory will be mine! BWAHAHAHA!

(update: compost is not ready yet. maybe next week.)