It’s the holiday party season. Next week, if you find yourself standing next to a stranger at a cozy get-together, try out some “didyaknow” jabber. It’s safe. You won’t see them until next year.

While we’re on the subject of Holiday get-togethers, endless small talk, and cocktails, have you ever thought, “Next time I’m standing at the bar, what’s the best way to keep the difference between scotch whisky, bourbon whiskey, and rye whiskey straight?”

I have an idea.

You’ll need a cocktail napkin and something to write with, but these things have a way of showing up just when you need them.

Order your scotch on the rocks, grab the napkin, ask for a pen, and scribble this out. 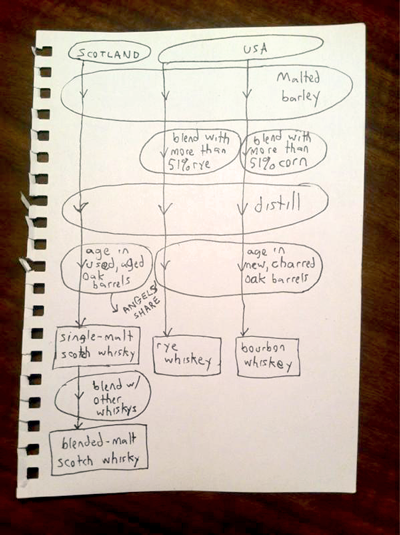 The person you’re next to will lean over and say something like, “What is that?”

“Oh nothing,” you will say. “Just keeping it all straight.” Then fold the napkin, put it in your pocket, grab your drink, and walk away.

“They’re bigger than they look.”

I watched a documentary on Bill Murray. It wasn’t about him per se, but about the stories of Bill Murray’s random drop-ins and sightings.

The Bill Murray Stories: Life Lessons from Learned from a Mythical Man

As an explanation of his behavior, the people in the documentary suggest that his joie de vivre comes from his training in improvisational comedy where the theme to every prompt is, “Yes, and. . .” He seems to take this approach to life and sometimes, it leads him to join strangers in a New York City karaoke bar. It’s an openness to life that leads to learning new things and meeting new people.

Last weekend I had a chance to put this in practice. Heading to a Packer’s game I was part of a group that was asked, “Does anyone want to go on the field before the game?”

Here’s what I learned: 6’7″ 265 is much more intimidating when it’s five yards away than it looks on TV. 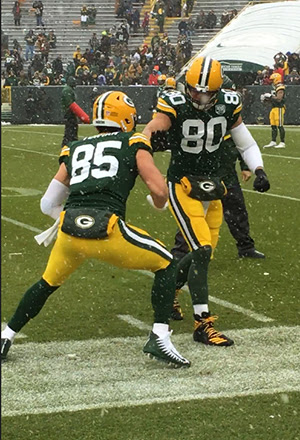