You’re familiar with the children’s game of “Telephone,” where the kids sit cross-legged on the floor in a circle. A specific message begins with one child and is whispered to the next one, and so on, until the message returns to the originator. The resulting message is never 100% correct and can often be hilariously, wildly off base. (Hilarious to a kid) Teachers use it to demonstrate that word-of-mouth information is suspect, and gossip is unreliable. 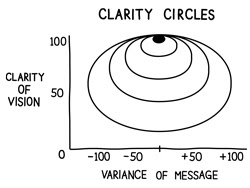 As 2018 develops, there is a similar game being played out in your organization through your culture. The way your people behave on a day-to-day basis is your company’s culture, regardless of what your mission, vision, and values statement says. Management guru Peter Drucker said, “culture eats strategy for breakfast” and he’s right. No matter what your strategic vision and stated intentions are, your people are watching to see how everyone behaves. Humans are great at mimicry and your culture is built on it. If your culture doesn’t match your strategy, just like the kids game of “Telephone,” your results are going to be way off base. (Which is not so hilarious.)

I’m a Denver Broncos football fan and they are in the midst of a coaching shakeup. The head coach is staying but most of the assistants are going to look for new jobs. One of the reasons given is that the head coach, new to head coaching, expected his experienced, established assistants to do their jobs with his vision in mind, but he didn’t hold them to it. He didn’t “inspect what he expected” in their daily behaviors and the team got away from him. Slowly at first, then disastrously in the end. That’s an example of culture eating strategy.

Be on the lookout for behaviors that deviate from your strategic vision this year. Start by looking in the mirror, then your direct reports, and go from there. As you and your leadership team go, so goes your organization.

We are in the midst of a cold weather pattern. It’s been weeks since the temperature has gone above freezing. The heater has been running non-stop and we’re running low on moisturizer. The pets are afraid to set foot outside causing us to watch them suspiciously in case they have an “accident” inside our cramped quarters. The trash is piling up because the humans don’t want to go out and they are fighting over blankets and the remote control. Adding to the cabin fever is that fact that there are more humans banging around than usual because they’re on “break.” That all changes next week because school is starting. Soon the other humans will have to go back to their apartments or leave the house for up to 8 hours each day.

Then I can get back to nappy time.