Everyone I know is saying. . . 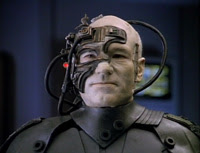 Besides a lot of family, too much food, and too much drink, are you up for another jarring experience next week?

When you’re with your friends and family, ask if any of them are willing to exchange their phones with you for a bit so you can scroll through their Facebook, Twitter, or Instagram feeds. You’ll have to overcome some heavy resistance, promise not to make fun of them, and not post anything on their behalf, but you should find a few takers.

It’s eye opening. “How come I never see posts from them?” you’ll think. Take special note of the ads they’re shown. What you’ll see is a glimpse into the very special silo that the robots are creating for your friend or family member, and they’ll see the one that you live in. This happens even if your family member tells you, “I never use social media.” Even if the digital footprint is non-existent, there’s a segment for that.

You’ve heard me say that our data has become the product for these huge companies, often without our consideration. I’m not telling you to grab the pitchforks and torches to march on Menlo Park, but I am saying that it’s one thing to hear that we’re being segmented/targeted, and it’s another to see what someone else’s worldview is via their social media feeds.

I have an unnatural affinity for the Smiths. Years ago I was told that the reason for this is because our teenage brains bind us more tightly to the music of our teen years than anything we hear as adults. Makes sense. I spent a lot of time listening to The Smiths in high school.

As I spend the morning thinking about Thanksgiving week, I am reminded of my hometown, Denver, CO, Coors Light, and my friend Duck’s car, the POSWAS. Cassette tapes, rugby shirts, and Wax Trax records. The Dysfunctional Family Thanksgiving.

From age18-22, every Thanksgiving evening was spent at a little bar under the Baskin Robbins on Hampden and Monaco. It’s name escapes me, but it got crowded with a blur of familiar faces looking for a break from the turkey, pies, and football. I’m not sure how it started back before cell phones, Facebook, and text messaging but it happened, year after year.

I can remember searching the bar’s jukebox for The Smiths, who were never there. Today, I just head to the Youtube, find an old live version of “Panic,”* crank up the volume, flood some dopamine into my system, and bask in an emotional afterglow.

I wonder if anyone will be there next week?

*update. My brother in law sent a pic of the bar, J.R. Cheers: