Set parameters for quitting before you start.

I’m helping a company add new people to a new division. We’ve spent countless hours sweating out the budgets and plans, and soon some talented people will make it come true. But before they set foot in the building, we’ve also spent a lot of time figuring out when to put the brakes on. Once these fresh faces start the work we’ll be acting like that Ben Horowitz quote, “all decisions were objective until the first line of code was written. After that, all decisions were emotional.”

The best time to decide where to turn back is before we head out. The decisions will still be emotional, but we’ll make better decisions as results start rolling in. 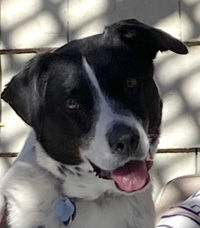 I’m prepping for another online talk this week. One of the topics is related to how people use the internet. All the world’s information but it doesn’t mean we’re any better at making decisions. I have a Greg standard story I tell about my use of Google to diagnose a child’s ailment. It’s a fine story but my mind drifts when I tell it. What would the child think? Does this make me sound dumb? Can I use real names? I wonder if there’s a place to buy new and better stories somewhere?

Whatever. I have a deadline, and I’m the only one who will remember the details of what I say anyway.

As I fret, Wilson the ABC is sitting at the door surveying his domain. The backyard is starting to come back to life, and we might even get the 17-year cicada emergence this summer. Lots to take in if you’re a dog, I suppose.

He notices me and rolls over on his back exposing his belly and the little wound that his mother told me about. If he had arms it would be by his armpit and I know what happened. He jumps on the fence when the neighbors are mowing or doing anything he wants to help with. The wound looks a little crusty, so I rub it a bit and his fur comes off, exposing his pink skin underneath. No sign of a wound.

This sends me into research mode. Photo carousels of dog skin conditions. You know what Wilson’s condition looks like? Mites. Ugh. How do I get rid of mites? Where are mites anyway?

My lovely bride comes in, and I spill the beans. Change of weekend plans, we may have to fumigate the place. She inspects the dog, calls the vet, and now I’m sitting in the waiting room as Wilson shakes. I don’t think he likes it here. It probably smells like stress. The vet takes a peek, shows me a healed wound, says it’s nothing, gives me some ointment for my trouble, and I pay the bill. I get back to the house and have to admit it’s not mites. Just the wound healing.

I have another internet decision story, though. Turns out new stories cost $50.