“You may fire when ready, Gridley.” – Commodore Dewey

I don’t know exactly how many fires I’ve made over the years. Maybe hundreds if you include the firework incidents or thousands if we include candles. Whatever the number, it’s been a lot. So imagine my surprise to learn there is a better way to make fireplace fires. The Top Down Burn.

Instead of getting the kindling and other quick burning items lit on the bottom and igniting larger logs above, you do the opposite. Arrange your largest logs at the bottom, next largest crisscross above those, put the kindling on top of that, and newspaper on top.

Light the newspaper and kindling then sit back. I’ve used it a few times now and I can attest to its effectiveness.

Top down burning leaves me with a lot more time to sit and stare into the flames, and it occurs to me, this approach is just like what it takes to get your team motivated to change direction. It’s just like FIT because if you pick the easy path, results are better.

Instead of focusing on moving your most productive, most established team members, focus on moving the easy ones. The ones ready for your message right now. It’s just like the top down burn saying, don’t worry about lighting up the big logs to start, the heat and gasses from the top will ignite them when they’re ready.

Let your team members who are most ready for action lead to momentum.

“There is no snooze button to a cat who wants breakfast.” – Anon 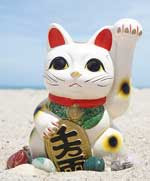 My lovely bride is always trying new recipes. This leads her to various markets around town looking for particular sauces and spices (which also leads to our fridge being packed with things like six varieties of fish sauce).

When the kids were young, she’d drag them on these adventures, and they’d often come home with a treat. One such trip resulted in my middle child bringing a new alarm clock into our lives. It may have been from Japan, maybe China, by way of the Asian Mart. It’s a Lucky Cat alarm clock. One paw moves and it has the clock in its belly. The alarm is, well, easily the most obnoxious alarm ever. The clock has since been broken, and we’ve lost the details, but we all agree it yelled at him to get up. A scratchy recording of a Japanese woman yelling “Wake Up” and laughing maniacally. It had one volume setting, ear-splitting, house shaking loud. The anxiety of the alarm going off used to interrupt my sleep. Loud.

I think about this clock from time to time. I’ve even tried to find it online, but no luck. (this is the closest I’ve found) It would make a great Christmas gift.

I’ve mentioned our own lucky cat, Bianca. Baby-B as she’s known in the ‘hood. She loves our morning routine. Loves it so much she starts dancing on our heads, scraping at the walls, and being a general nuisance anywhere from 15 to 45 minutes before my alarm goes off. My bride tries to control her with a squirt gun, catnip, and other treats, but Baby-B isn’t changing. When she wants the day to start, she does her best to get it going.

Daylight savings time ended two weeks ago. What used to be 5am is now 4am. Baby-B may have even shifted an hour earlier with her antics. I can’t be sure because I’m blurry eyed and trying to sleep. When it’s dark I find it hard to track details in the war between wife and cat.

I don’t think I’ve had a good night’s sleep in decades.