Coach: “Manchester United. Super rich. Everyone either loves them or hates them.”
Lasso: “Dallas Cowboys.”
Coach: “Liverpool. Used to be great. Haven’t won a title in a really long time.”
Lasso: “Also the Dallas Cowboys.”

A great husband, a super parent, a number one supporter, a best friend, and a helping hand, sometimes.

It’s tough to do and be best, all the times.

Revel in it, remember it, know you did it, and know you can do it again.

“Never go on trips with anyone you do not love.” – Hemingway 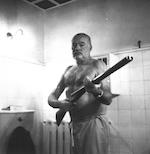 When you read reviews, do you ever wonder who is on the other side? Do I have anything in common with them? Would we be friends in real life?

I’m thinking about this as I plan a holiday trip for this fall. I made a decision weeks ago, but new ideas keep popping up. Combing through various vacation sites has me doubting my original idea, especially when I run into a review saying, “don’t do it.”

This forces me to think critically about the reviewer. Who are they? What’s their agenda? Etcetera. Speaking of reviewers, did you start watching the Hemingway documentary? The story about Hemingway slapping a reviewer in the face with a book made me laugh. I dug this up from a 1937 NY Times:

“Come out from behind that false hair on your chest, Ernest. We all know you.”

The volume containing this essay happened to be on Mr. Perkins’s crowded desk, “and when I saw that,” says Mr. Hemingway, “I began to get sore.”

In what he hoped was a playful manner, he said, he bared his chest to Mr. Eastman and asked him to look at the hair and say whether it was false.

He persuaded Mr. Eastman to bare his chest and commented on its comparatively hairless condition.

“We were just fooling around, in a way,” Mr. Hemingway said yesterday. “But when I looked at him and I thought about the book, I got sore. I tried to get him to read to me, in person, some of the stuff he had written about me. He wouldn’t do it. So that’s when I socked him with the book.”

Those two didn’t have much in common.

I won’t have the chance to bare my chest and beat up this reviewer if I end up having a fine time at the resort he trashes, but I’ll keep my eyes out for another opportunity. I have to try this chest baring move.