“I think unconscious bias is one of the hardest things to get at.” The Notorious RBG

When was the last time you sat down and looked at your organization’s payroll with the intention of checking for bias? I was witness to a fascinating discussion between business owners prompted by one of their wives reading Sheryl Sandberg’s book, Lean In. These two successful business owners run small-to-mid-sized businesses and have what I would argue are some of the most loyal, happy, well-cared for workforces that I’ve run into.

The reason their conversation piqued my interest is when the issue of gender pay was brought up, both owners were convinced it was not an issue in their companies. The wife was not so convinced. When payrolls were brought up as evidence, the business owner found a glaring pay discrepancies, right at the top of the organization.

Needless to say, those discrepancies were addressed and the history of the pay rates was investigated, but that wasn’t the interesting part of the conversation. The interesting part was the discussion on hidden biases that are, well, hidden. And not how we respond to these issues, but how we become aware of them. As the saying goes, “Cada cabeza es un mundo,” and yes, how do we break through the worlds that are inside our heads?

The first step is always to acknowledge the bias might exist. Then we find a way to measure it, because measuring helps us understand it. When we understand it, we have a shot at controlling it, and once we control it, we can improve it.

What gets measured gets managed, you mother Drucker.

How many people are you going to tell that story to?

Although my relatives in legendary Green Bay say brushes with fame are not a regular occurrence, I don’t believe them. Whether it’s a story about someone drinking keg beer in the driveway with Fergilicious’ husband Josh Duhamel (are they still married?) or being at a tailgate watching them being followed around by an English camera crew shooting an NFL special, things just seem to be turned up a notch up there.

Last weekend I visited the frozen tundra to enjoy a nice dinner, stop by a little concert in the Lambeau Field parking lot, and watch the Packers’ home opener. Here’s the shot of me leaving the restaurant. 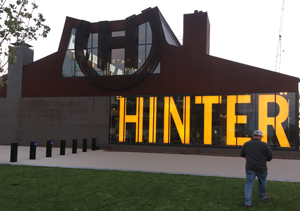 We’re late to the parking lot concert, so the most we can hope for, besides successfully avoiding numerous wheelchair bound Green Bay residents, is well, this scene. 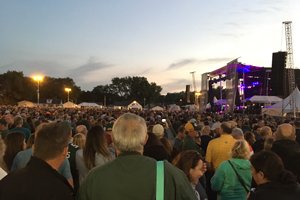 That, my friends, is the back side of 30,000 of our closest friends. All here for the Steve Miller Band. Yes, that one guy who is like 74 or something.

I stand in the back of the crowd and think to myself, I’m tired, it will be good to call it early and get some sleep. That’s when I get flashed a quick hand wave from my brother-in-law and he says, “we’re going backstage.”

Have you ever been on a $1MM tour bus? About 10 minutes after the hand wave, I’m on one. It’s hard to capture the feeling, but I did take a pic. 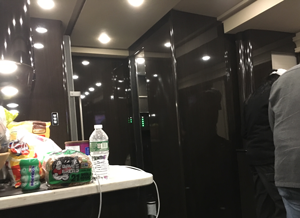 I guess our man likes Dave’s bread and Mentos too. We have so much in common! While Steve does his work on stage, the bus group cajoles me into doing shots of Patron out of a red Solo cup. I get a little disoriented, fight the urge to boot all over my new friend’s bus and head out of the bus to take my place up front. This is my new view out toward my old view: 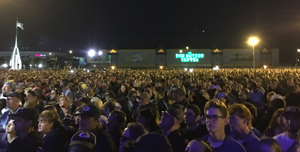 I’m in front of the front row and I can tell you this, Stevie looks great for 74. He knows I’m thinking this and nods my way. 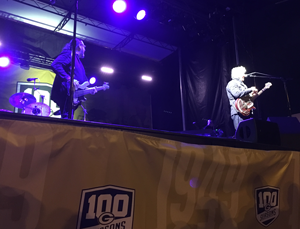 It may have been the Patron, but I even took a selfie. 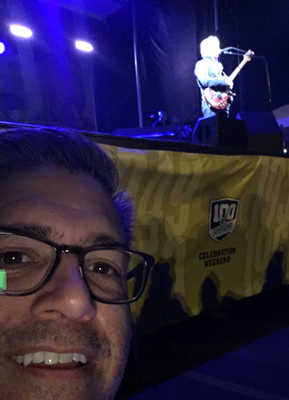 2 hours later, I’m at the bar telling roadie tales in exchange for drinks when my wife walks up.

“Are you still telling that Steve Miller story?” she says, eyes rolling.