At the end of last week we start on a very long road trip. With work needing to be done and a fine internet connection on our scenic roadways I pop out a few emails to clients and prospects about various projects. These are hastily constructed communiques, typed out on my phone while filling up with gas or grabbing a snack. (I am the primary driver most of the way.)

On day two we get an early start. After the sun comes up we’re ready to grab breakfast and another cup of coffee. Pulling into the gas station I check email and see a series of responses to yesterday’s notes. Some make sense, but one doesn’t. As I ponder how the conversation went sideways I re-read my note. And there it is. A misspelling (or autocorrect?) gives a new meaning to what I meant to say. A client in a bad mood adds to the confusion. A quick call clears things up.

It just so happens that we’re listening to Matthew McConaughey read his autobiography, “Greenlights,” to pass time. Most professional audiobooks are great to listen to, but this one is a real treat. It’s McConaughey telling his story, and he’s into it, man! I don’t know what it would be like to read the book, but I can’t imagine I’d get as much out of it as listening.

His supreme skill at telling a story stands in stark contrast to my ability to keep a project on track via email. It’s yet another reminder that how we communicate is just as important as what we communicate.

That and picking up the phone beats email. And after driving hundreds of miles to see my youngest, nothing beats being with someone in the flesh.

“. . .I want you to live with the waterfall, not just to look at it, but for it to become an integral part of your lives.” – Frank Lloyd Wright to E.J. Kaufmann 1935

We’re in the midst of a great re-shuffling at the Chambers household. The youngest is taking up residence in Brooklyn, NY, the middle child is relocating back to Omaha, and the oldest is contemplating a move West.

While they do that, I’m trying to figure out why my tomatoes aren’t thriving. Did I tell you about our espalier apple tree? It’s trained to grow along a trellis. Ours has three levels of branches and when mature will produce three types of apples. This year the top level is producing some variety of tiny little apple. They look and taste just like apples. It’s thriving. 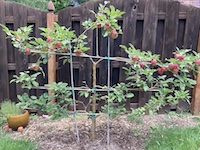 Brooklyn doesn’t have room for such greenery. I know because we drove out there to drop off the boy’s furniture and saw it for ourselves. It’s a long drive. Silly to do, really, but two of the first four packages sent to him disappeared. We were happy to make the drive, inspect the boy, experience his environment, and make the long drive back.

On the way back, we made the trip a little longer and stopped by one of architect Frank Lloyd Wright’s masterpieces. The guide says it’s not just a masterpiece, it is his best work.

It is much bigger than our humble abode out here, somewhere in the middle of America. Very impressive. Breathtaking, really. In the living room there is a 5 by 5 foot painting of the owner.

I didn’t see a garden, but it’s a large, densely wooded property, and I was limping around on a bum knee. If there is a garden there, it’s a good chance the tomatoes aren’t ripening either.

I didn’t check for apples.