The Downward Pressure of Information on Seller Commissions 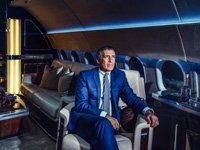 If you’re a fan of sales and selling, this New York Times article on airplane seller Steve Varsano, owner of The Jet Business, is a page turner.

Selling airplanes has been one of my go-to analogies when describing product complexity and budget prioritization, “on one end of the decision making spectrum you have something like a tube of toothpaste, on the other end you have something like a private jet.” This article gives a glimpse into the a world where buyers have big budgets and the ability to prioritize how those dollars are spent intersecting with a product that is complex and completely customizable. A $70MM private jet.

My favorite parts, in no particular order:

The importance of location, “There aren’t many places on Earth with a large enough community of transient billionaires to support such immoderately high-end retail, but central London is one of them. After much thought about his new location, Varsano decided that the best chance of catching his customers on their brief earthbound dalliances was from a space on Park Lane, which runs along Hyde Park’s eastern perimeter.”

The linguistic high level abstractions he uses, an aircraft is a “time machine,” do the math and you’ve got a “free CEO,” and asking about the value of a CEO of a $10BN company arriving at their destination “refreshed and ready to go.”

And the attention to detail, “A research staff works on a trading floor behind convexities of smoked glass, at cockpit-like desks of kid-glove Bentley leather with three screens apiece. They begin with an industry-standard subscription database, but its information — serial number, registration information, sales history, whatever is known of the ownership and any publicly listed current prices — is almost always incomplete or unreliable, as the most sensitive data is concealed underneath layers of shell companies incorporated in places like Delaware, Panama or the British Virgin Islands. Beyond ferreting out the basic question of ownership, Varsano’s researchers try to gather as much market information as they can.”

It’s in that attention to detail, that hidden information, where Steve Varsano, and many sellers of complex products to high budget-prioritizing executives make their living. It’s worth paying large commissions where few people hold the information. Take a look at the following figure that I use to describe the interplay between product complexity and budget priority. 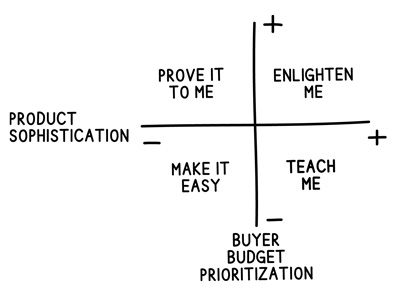 I’ve used this to explain how Amazon sells convenience and consultants sell enlightenment, but what’s missing from the graphic is the role of information. Everyone knows a lot about paper clips, but very few know about buying private jets. Information creates tension and the private jet business, it is revealed, is not immune to information’s downward pressure on commissions.

“There’s a strong downward pressure on commissions, which regardless of the purchase price of the aircraft usually top out at $1 million — a take of 1.4 percent on a $70 million plane. That world is just so vanishingly small, and there’s so much information on the market, and the principals are so powerful, that somewhere there’s invariably a small-time broker with a desk and a cellphone ready to elbow in for a fee that Varsano would consider an insult to his professional acumen. ‘There’s always some guy out there willing to do a deal for $25,000,’ he complained.”

Your margin is mine

I once read that Jeff Bezos said something like, “your margin is my business opportunity,” and behind that sentiment is the idea that the value of your margin comes from a lack of transparency. If a jet buyer can tap into all of the information they need to make a decision without the benefit of The Jet Business’ research, knowledge, and experience, then why should the buyer pay more commission? I see this happening in real estate, in high end art sales, and other niches. It’s lurking in the leaks of classified information and the push to put everything on a giant ledger like blockchain technologies promise.

So what is a Varsano, a “large, fit, exceptionally good looking and effortlessly agreeable self-made man of 61. . .” with an “imposing head crowned with slicked-back pewter hair, piercing eyes of an Aegean blue, an imperial nose and the resplendent smile of a beloved crooner on a Caesars Palace pension. . .” to do?  The guy sounds like he was made to sell $100MM jets, but who wants to do that for $25K a pop?

Here’s a hint. Keep the focus on outcomes. More information has always led to change. From Gutenberg’s Press to photography to the Internet, things change when more people have access to information. People pay for outcomes and he knows that. If I’m a CEO and I want to buy time, a jet isn’t the only way to do that.

Listen, the press of information will continue to make selling harder and harder, but for the time being, sellers can offer incomparable value by helping make sense of all of the information out there. By helping clients make good decisions. That won’t last forever, especially in decisions by committee, but even in that case it’s better to be selling outcomes that outputs. Just talk to all the paper product salespeople who used to make $100K a year with a company car, 4 weeks paid vacation, and a pension . Those opportunities came and went, but capitalism doesn’t care about the individual, just the continuing creation of value at the macro level. It promises an overall increase in the standard of living, just not yours.

Still, as that article makes clear, at one point there were fat commissions on $4BN in sales. . . and that wasn’t bad for the big guy while it lasted, right?

Greg’s Right FIT Sales and Marketing Newsletter, #110 in a series
Scroll to top