In this issue: Contrast Effect

More good stuff taken from The Human Being’s Guide to Business Growth, 2018. (Another clip. Combat the “contrast effect” by building a bench strength.)

Building Bench Strength
As you can imagine, conversations about change, and their confrontational nature, aren’t the easiest issues to work through. As you demand accountability to your company’s strategic vision, it shouldn’t come as a surprise that some very talented people, including the ones that you have identified as future ready right now, may not buy in. The solution to this problem falls into two buckets.

One is to ignore the lack of buy-in and let it work its way out. Don’t press too hard but keep the vision in front of your people because over time, like dripping water on a stone, you’ll make progress. One of my managers used to tell me, “Take the route to work that drives you through the nicest neighborhoods because you’ll see yourself there and pretty soon you’ll be doing the things you need to get there.” I get what he was saying, which is that whatever you’re around the most, being human you tend to mimic it. That is a strategy that will work here. You can keep preaching to the congregation and eventually the pews will be filled with believers.

The second approach is to be proactive. My advice here is rooted in Mr. Carl’s wisdom. From day one of my work with him, he encour- aged me to keep six months of expenses in my bank account. I was poor enough to think he was crazy but he was telling me if I feel like I’m close to the edge, I’ll tread softly. However, if I have a safety net, I could be bolder. I took a group of community college students to China a year ago and for most of them, this was their first trip abroad. Their biggest fears weren’t the food, the culture, or the travel arrangements. It was the unknown nature of what everything would cost. How much money did they need to bring, exactly? It didn’t help on day two when I took a group of them wandering through Shanghai and we became hopelessly lost. Their panic was palpable. Later, it occurred to me that most of these kids were from families that would not be able to help them out of a jam, let alone one that occurred half way around the world. There is a value in having resources to fall back on. It makes you bolder. We apply that same concept here to having human resource reserves, or bench strength as we’ll call it. It lets you pressure your personnel to perform.

The next chapter will focus on tactics you can use to build your bench strength, which will let your leadership push more forcefully for change because if your talented people leave, your managers have a pipeline of talented people who can come in and take their place. As ruthless as it sounds, it has the effect of speeding up results, reducing turnover, and building momentum toward your vision. 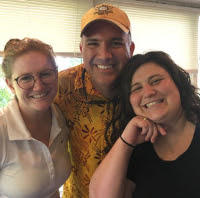 I spent the day on the golf course. It’s something I do at least twice a year, whether I need to or not. This time it’s a little tournament that my in-laws host. It’s a scramble, which means we take the best shot of the foursome and proceed from there.

I enjoy the format because I never get penalized for terrible shots and occasionally get rewarded for a good shot. Today promises to be no different, but as we get a couple of holes in, my internal pressure meter starts to creep up. Even without penalties for bad shots, as the group keeps passing over my efforts, I feel like I’m not contributing and having a bad day.

Mind you, this isn’t the kind of tournament that is anything but fun. I can’t win anything. The only prize is for the losing team, and even then, you just don’t want to be the most valuable loser (MVL) on that team. So, why am I getting stressed out? I find myself thinking, “I stink, but I’m not on the worst team and I don’t think I’m playing as bad as my teammates.” Textbook contrast effect, right?

The day goes well, fun is had, and I head home to discover a block party I forgot about. We’ve had some turnover in the neighborhood and new families are moving in. New, energetic, social, families that buy houses and fix them up real nice. I look over my beer at their lush, manicured lawns and think about what my crazy weedy lawn is looking like. “It’s bad,” I think, “but it’s not as bad as my neighbor’s.”

My wife and I walk back to our house as the party is breaking up. The neighbor with the weedier lawn is just pulling in. As we chat, he says, “Hey, did you see we finally got the lawn guy out here?” to which I said yes, because it was obvious. “The old lawn guy said he’d never come back,” he said and looked over his weed kingdom. “But at least our lawn doesn’t look like that,” he said, pointing to the across the street neighbor. “Their’s is really bad.”