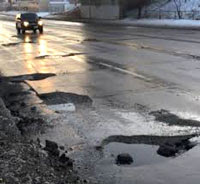 Winter’s over and now we’re into pothole season. The time of year when the ice thaws and we discover exactly where the water eroded pavement. When it rains and the potholes fill with water it’s hard to tell if you’re about to drive across a shallow puddle or suffer a teeth-jarring, axle-wrenching thud. The only way to deal with it is to proceed with caution. In this way, navigating potholes is similar to business growth.

Stick with me here.

Think of a business growth as a lake. On one side, you have a handful organizations that grew large and prosperous by swimming across the lake. On the other side, you have thousands of little organizations that long to reach the growth side. To move from one side to the other, however, the little organization has to swim across open water. It has to expose itself to whatever hides in the murky depths of the lake with nothing to hang on to. It makes for tense times, high risk for high reward.

Just like swimming across dark water or rolling over potholes, growth has its dangers, but the swim has few competitors and is worth the risk. Keep your eyes on the goal and stick to your process. 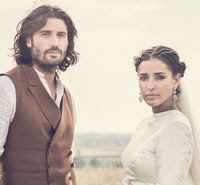 My lovely bride and I are regular move-goers. I’m a sucker for , a dark theater, a big buttered popcorn, and a great story. Our favorite place to watch movies is a local non-profit theater called Film Streams because in addition to big name movies, they show a lot of smaller films. Last weekend we saw a great one, “Birds of Passage,” a Colombian epic about a family in the drug trafficking business in the 70’s and 80’s. It’s a gripping tale and, I should note, it’s subtitled.

Among the many reasons we enjoy this movie house is the occasional lecturer. Last fall, we attended a Latin America film series called Cinemeteca which included a post screening Q & A with the movie director from Barcelona.

The film was beautifully shot with actors that were easy on the eye. I’d tell you more about the plot but I had a problem that night. Usually I’m pretty good with tracking subtitles and the action on screen, but in this case I was lost. For the life of me I could not figure out exactly what was happening. The room was packed, and based on the pre-show banter, most of the attendees spoke Spanish, so I tried to make it look like I was tracking. Lucky for me, the story resembled a soap opera, so it was like having to sit through a telenovela on Univision because the remote’s battery died and you’re too lazy to get up and find a new one.

It wasn’t a total loss, I knew the pretty girl had a thing for this handsome guy and her new handsome husband wasn’t happy about handsome guy 1 hanging around the wedding, I mean, after all, handsome guy 1 had already married pretty girl 2 and had a kid and another on the way, so he probably shouldn’t have showed up at pretty girl 1 and handsome guy 2’s wedding, but overall I just felt confused. Like I was missing all the inside jokes but was embarrassed to leave the table.

When it was over, the diminutive film director got a big round of applause and prepared to take questions. Speaking in a thick Spanish accent, she started to explain the origin of the film and other interesting tidbits about Spanish culture. Then, almost as if she were peering directly into my brain she said, “and I have to apologize for the subtitles. I’m not sure what went wrong but most of them were missing. It must have been very confusing if you didn’t speak Spanish.”