“The prevalence of factual data in anthropological monographs stems. . .from an attitude of ‘when in doubt, collect fact.'”
– Nigel Barley

One way I help clients is with finding new people for important roles. We spend most of our time talking about the future because  the organization of the future will not look like it does right now. Even if there is an immediate opening to fill. For this reason it helps when leadership has a shared idea of where the firm is going. You can’t predict the future, but you can predict about where your organization will be, and the skill sets needed when you’re there.

The key to this is not getting tied up in the experiences your new hires will need, but focusing on the behaviors they will need to exhibit. It opens up the possible hiring pool and if the skill set needed is a few years in the future, allows you to plan a learning path for the new team member. Some candidates will have the experience now, some will have the talent without the right experience, and some will have talent alone.

I thought a lot about this as I read the book, “The Innocent Anthropoligist, Notes from a Mud Hut,” by Nigel Barley. It’s about the author’s adventures observing the Dowayo people of northern Cameroon. As he described an anthropologist’s field work I thought, this is the exact skillet sales and marketing. The prospect’s organization is like the foreign Dowayo people. They have their own beliefs and systems, and your sales/marketing team should act like anthropologists. Spending time doing field work, learning everything about them.

It’s a stretch, I know, but it’s real. I haven’t run into many trained anthropologists in my time, but I’ll be on the lookout for them in the future. I know how say, trained educators do in sales because they have learned behaviors for communicating complex ideas, simply. Now I think I’ll dig up an anthropology major to put in a marketing role.

If you know any, send them my way. I have questions.

“Oh, Mexico
It sounds so simple, I just got to go
The sun’s so hot I forgot to go home
Guess I’ll have to go now” – Sweet Baby James 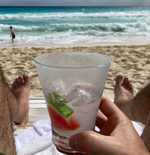 My lovely bride and I are about to celebrate 30 years together. Knowing this, earlier this year I booked a quick celebration trip to fit between her school’s academic quarters. This meant we would roll through the fun and family during Thanksgiving and head out Sunday morning, getting to the beach in the afternoon.

I brought my beach reads, including the aforementioned “Innocent Anthropologist” and it put me in an observational mood. I wasn’t spending time in a tribe all that different from my own, but I came away with some new facts to fit into my scaffolding, as they say.

I need to take more/better notes. I guess I’ll just have to go back and study these peoples further. My inner mad gringo says so.