“‘Consistency is the most overrated of all human virtues… I’m someone who changes his mind all the time.” Malcolm Gladwell

I’ve been on a bit of Gladwell kick lately. His Revisionist History podcast is a good listen and I recommend it. As he promotes the podcast, when asked about his day, he mentions that he is not on social media and works to limit his exposure to online chatter. His reasoning is that if everyone is online, he better serves his audience if he’s not there. While they zig, he zags.

This sentiment reminds me of an old retailer trick from a friend. When he was running his store, he’d ask managers from other stores to come and spend 30 minutes in his place, while he spent 30 minutes in theirs. Neither knew all that much about how the stores ran, but they would walk around, observe what they could, and report their thoughts. He found it to be so effective, that we used it in our call center, and I found it so effective that I have used it everywhere I’ve been since.

Why does it work? Think of sensory adaptation. I visited my son in college and when I walk into the hallway of the dorm, my knees buckle from the stench. Stale food, beer, and dirty laundry. I hug him and am enveloped in a cloud of Axe body spray. He’s oblivious to both smells because he lives in it. Sensory adaptation.

The same thing happens in your business. Get a new set of eyes into each department. Have your managers trade places for 30 minutes. What do they see? What are they missing because their senses have adapted over time?

“That was a weird question.”

Yesterday, I forwarded a message from my phone and right after I hit send it asked, “do you want to include all attachments?” I thought, hmm, that’s a weird question. Turns out the attachments were other parts of the email conversation that I did NOT want to forward.

After 20 plus years of email experience, you’d think I was past the accidental forwarding of stuff, but my friend, you’d be wrong.

Teh experience reminds me of my biggest send/save experience back when networked PCs were the new thing. Our department was among the first to get them and we started exploring all the features. Background pictures, default sounds, and a little instant message tool WinPopup. 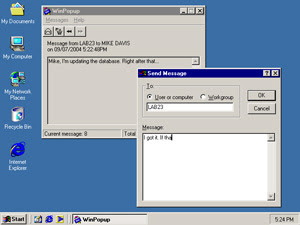 Since we were on the phone all day, the little WinPopup messages were terrific timesavers. Managers could listen to calls and pop up a “ask about X” message. You could organize a lunch event. And you could send insults and jokes. You just needed to know the computer or workgroup name you were sending it to. There was no thread, no conversation, just little messages that popped up, you read them, and then moved on. To respond you made a new Popup. Very clunky, very 90s.

One morning, I send a rant to a co-worker. A screed that rips my manager up one side and down the other over some perceived slight. It is cathartic. And funny. I pick a few choice physical details and personality quirks to spice it up, mention an illicit affair I think he is having, then send it along.

Then I wait. And wait. No confirmation. No reply. No piling on. Nothing.

My stomach falls into my shoes. Where did that message go? Which PC address did I sent it to? There’s no way it went to. . .my boss?

I am frozen. Lead in my feet. But I know what I have to do. My parents taught me well. Better to get the poison out immediately.  I trudge over to his desk, ready to be reamed. Maybe fired. Who knows?

He isn’t there. I look at his PC and hit the spacebar to make the screensaver go away. Locked. I hit the CTRL-ALT-DEL and it asks for a password. I have one shot and go with a series of early go-to passwords for mid-1990s Omaha – BIGRED, GOBIGRED, HUSKERS123 – It works! I’m in!

My palms get sweaty just thinking about it. That day, I vowed to always double check before sending. Make myself pause, re-read, and then send again. It’s saved me multiple times.

At least that email is just to my Mom.