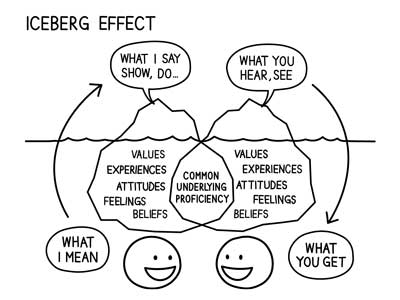 While thinking about the hidden rules and pathways we encounter in our daily lives I hear a podcast about language. Specifically, teenagers/young adults and the creation of slang. It occurs to me that the rules of language is probably the most common example of hidden rules at work we experience.

The term “code-switching” originated in linguistics to reference the way humans can move between languages when communicating. It also refers to altering more than speech, like appearance, behavior, or how we express ourselves. We do this without thinking about it. The country club demands a different code than the sports bar. The way we interact with people on public transit is different from a family dinner. In general, these hidden rules are gatekeepers to keep the status quo. They keep society operating smoothly in a broad sense.

When we don’t know the rules, friction develops. These situations are fodder for comedy or drama. Take the TV show “The Fresh Prince of Bel Air” versus the movie “Gran Torino.” This happens in the workplace too.

Sales, as a profession, forces you to adapt quickly to multiple hidden rule environments. As such there is a flattening of rules that develops over time which can lead to conflict. In pursuit of a deal the salesperson might plow through a prospective customer’s organizational rules, making everyone uncomfortable. The upside for the salesperson is if they’re good at it, they can break through the barriers hidden rules put in place. For instance, the lawyer without the right last name, pedigree, or contacts who excels at finding new clients becoming partner of the firm.

Take a look around at the hidden rules in your day-to-day existence. Once you see them it’s hard to unsee, but once they reveal themselves to you, opportunities show up too.

Home is where you are always tripping over a pet.

I’m hobbling around a festival event when I see a neighbor. They say they haven’t seen us walking by the house lately, and it’s true. Willson the ABC pulled up a little gimpy a few months ago followed by me doing the same thing. One (or both) of us may be experiencing some sort of sympathy symptoms, my lovely bride says. I say, I’m getting old, and my neighbor corrects me. “You’re getting old-er,” he says. We all laugh.

The weather is changing here in North America. The daylight has dipped under 12 hours a day this week. I propped up the covers for my fall garden. (It turns out I could have done this earlier, and it would have helped with the moths!) I watched my lovely bride can the last of our tomatoes, and I’m looking for places to winter some of our less hearty plants.

Getting old versus getting older. It’s an interesting distinction. One that probably wouldn’t have entered my head if it weren’t for that damn cat’s refusal to yield on the basement steps. He knows I have issues with my knee and while I successfully avoided him, I did some damage to my old-er joints. He’s a pain.

At the wedding one of the bridesmaids brought him up. His name is Ajax, aka Driftwood, and she mentioned him because my son never admitted to “Jax” being part of the family mix. She demanded “Justice for Ajax,” which is kind of funny.

Or was kind of funny. Until he tripped me.