“And bring me all passengers, I want them alive!” – D. Vader 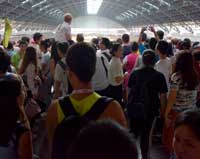 One way to look at your prospect’s decision-making process is to put it on a continuum. On one side, selling looks more like belly-to-belly, nose-to-nose activities. On the other side, marketing looks more like start-spreading-the-news, did-you-hear activities, but sales and marketing cross over a lot along the way. It’s the nature of decisions.

I bring this up because if your sales team is active but results are lagging, check who they’re getting in front of. One company I work with divides its prospects into segments like A, B, C, D and we run checks that the sales team is spending most of their time in front of A prospects. Most salespeople find it easiest to get in front of C prospects and fill their activity reports accordingly. Force them to concentrate on the top tier and watch growth happen.

One way to help your people spend more time in front of their best prospects is to invite those best prospects to a low commitment, well-attended event. Bring them all together, let them visit with other A prospects, have them mingle with current customers, let them make small talk with reps, and give this A group new information to make them look better in their jobs.

Should you wander down this path, keep these general ideas in mind when planning such an event:

Make your event exclusive, name-drop attendees, find a unique venue, don’t skimp on the swag, and think “third-year-first” when planning follow up. 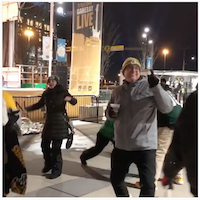 Last week I mentioned seeing yourself from the outside-in because I looked through a set of photos and more than once found myself wildly gesturing in the background. This week I bring you more outside-in snaps, but this time it’s evidence of my white-man’s-overbite:

All this holiday revelry reminds me of the days when I used to be a regular at fundraising events. As you know, the nature of such events is you end up seeing the same group of people five or six times a year. These aren’t your close friends, they’re barely even acquaintances, they’re simply people you’ve shared a table with, or accompanied to a post-event party, and come to recognize over time. The problem is you only know them in one setting which is a superficially social. I say it’s a problem because when I see fund-raising-guy-or-gal at the bank, I wave, mouth “Hey!” then through my smile mutter, “ya drunk.” It’s shallow, I know, but it cracks me up.

Last weekend, after the impromptu dance party and a Packers victory, we end up back at UFB’s restaurant for a post game celebration. I strike up a conversation with a guy I see at the games maybe once or twice a year, and we yuk it up like old times. He points to another recognized party-goer who points back, recognizes me, we wave, give a thumbs up and mouth “Yo!” to one another across the crowded bar.

It’s late and my eyesight isn’t what it used to be, but I swear I see him mutter “ya drunk” as he turns back to his group.