“I learned this, at least, by my experiment: that if one advances confidently in the direction of his dreams, and endeavors to live the life which he has imagined, he will meet with a success unexpected in common hours.” Henry David Thoreau 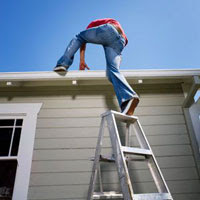 Last year, when my house was hit with a freak hailstorm and I needed to replace the roof, I was a potential client with a potential piece of work for the area’s roofing companies. Their business development people would take my call and determine if my house was a good or a bad fit, developing the opportunity or disqualifying it.

In preparing for my call, these roofing companies would have done well to imagine a great outcome before engaging with me because how you develop the opportunity will define the success of the project. Since they replace roofs all day, every day, and I replaced one roof in 15 years, it would have helped to define what mutual success looked like. I had concerns, they had concerns, so together we could come up with a result we can live with.

Instead, the successful outcome I heard from them was, “success is getting you to assign us to your insurance company.” There wasn’t discussion of timing, they made assumptions on investment (“zero out of pocket to you!”), no questions on aesthetics, and human resources weren’t ever touched on.

In the end, I played the role of buyer and seller. Later that summer, when they pushed the job out for 5 weeks because of a staffing conflict, I didn’t care because I knew timing was far less important than aesthetics, and focused on it. In the end, happy customer, happy roofer.

Contrast my result with a neighbor using the same company. He suffered the same delay, became infuriated, and that same delay has led to a lot of complaints. The roofer’s truck has been there so often, I thought the roofer may have moved in.

This neighbor proclaimed he would “never use that company again!” When he asked what I thought of them, I said they delivered as expected and I’m happy. He muttered something about “upgraded shingles” and moved on.

I see pictures like this and think, “See? That there? Reason 122 I will probably never wear a spring scarf.”

Well, never is happening because I am packing my new man-scarf for Paris. The weather looks perfect for it with some clouds, temps in the mid-60s, and maybe even some rain! The weather coupled with my wife’s assurance that I won’t be alone in my scarfiness, led to this moment.

At least it’s only a scarf.

In the end have fewer issues wearing a man-scarf in the crowd than I did wearing a lava-lava in public. I thought about it when I sold Mad Gringo sarongs but couldn’t get used to the “freedom.”