You Don’t Fix Your Way to Growth

Great long-distance digital conversation this morning. (Well, as great as exchanging a massive amount of emails in a short time can be. . .)

The subject? Fixes and Growth.

Excuse the blatant anonymizing here, but to protect the innocent I must generalize!

“Slim” and I were discussing business development efforts at his “dude ranch” and I thought he sounded suspiciously like he wasn’t trying to Grow as much as he was trying to get back to “where things were” a few years ago.

You know. Before the economy went all to heck.

Slim is feeling like his group is not executing like they used to, so he wants my help to grow.

My issue is this: what Slim is talking about. . .that’s not growth.

What ensued was a classic “definition of terms” exchange. In this note I get to dominate the conversation and it is predicated on these two pictures I sent to Slim. (best cowboy name ever) 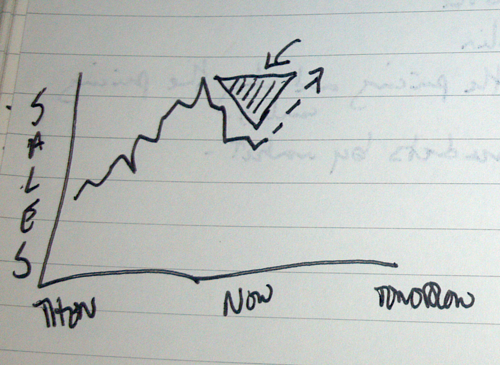 Slim is thinking that this delta, (where my arrow is pointing) represents “growth” or “new business development”. I say it’s all “fixes” that he’s talking about. He has a prescription in mind. A solution. And at best it will get him back to where he was.

So I sent this to him: 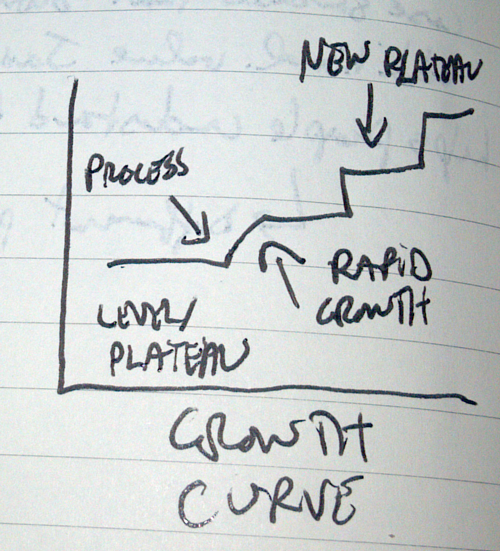 Now, this pretty picture isn’t the same thing, is it? The reason it’s not the same is because it’s built on the assumption that now is the “new normal”. It’s an analysis of Slim’s existing business development processes and isn’t tied directly to results.

This is where Slim and I had the longest exchange.

When I dig into a target, it’s based on what’s happening right now. Not back when. Not the best case period. Right now. I picked this up in the bank. Experts at “re-forecasting” based on current results. It’s unsafe to live in the past but pretending like the future is happening today is dangerous too. What Slim was prescribing for his group were “fixes” designed to get back to some previous result.

Things change. That’s our challenge. The better we are at dealing with change, the better chance we have at business development growth.

Back to Slim. What finally seemed to get us on the same page was my statement that “you don’t fix your way to growth.” It broke him from his past results. In reality his dude ranch is simply different than it was 6 years ago. Lots of things were different. Facebook just opened to the public months before 2007. The iphone came out in June 2007. Mad Gringo came online in 2007.

My point is, if you’re not happy with current results, start by defining where you are today. As exact as you can get. Then define where you want to be with your major metrics.

Slim has done an excellent job of reducing his fixed expenses while subtly changing his customer experience to fit into his new cost structure. His net has steadily come back and is close to pre-recession levels. In my high-level view, Slim was back. Fixed.

With that in mind, we got off Slim’s solution and got back to defining outcomes. It looks like we’ll center the discussion on building on his team’s strengths and find growth by focusing on what Slim’s team is good at.

Or maybe Slim will tell me to stick it. Either way, we’ve reframed his expectations and now Slim can get on with improving his processes to set up the next period of “rapid growth”. It happens. Swear.

Dennis Minton: Attitude and Sales-Think Right
Helping Your Sales Team Qualify Prospects with the Budget Question
“Find-Hate-Lose-Repeat” Will Kill You Eventually – Job Search Advice from Hugh McLeod
LinkedIn, Sales Prospecting and Being Open to A Better Future
How To Spend More Time With Your Clients
Privacy is the New User Experience Best Practice – Part Two (OPPA)

Tracking UsersDennis Minton on How to be Successful
Scroll to top